Binary Star Hypothesis of Russell - Origin of the Earth - UPSC 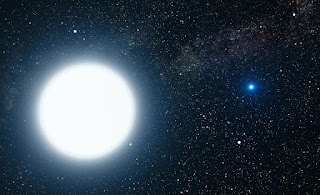 The binary star hypothesis was put forth by Russell and Littleton in the year 1937. This theory talks about the origin of the earth, it says that in the starting sun was not the only star, there was another star which was 2900 million kilometres far from the sun. These two binary stars were revolving around the same centre, but suddenly a third star came near to the second star which was 4.5 - 6.5 million kilometre far. The gravitational force of the third star had create tides in the second star, but the sun was not affected because it was too far from the sun.

The substance of the binary star of the sun started revolving around the sun because of the gravitational force of the sun, when the substance was solidified it created planets, and initially they were in the liquid form, and when tides occurred in those liquid substances it created satellites.