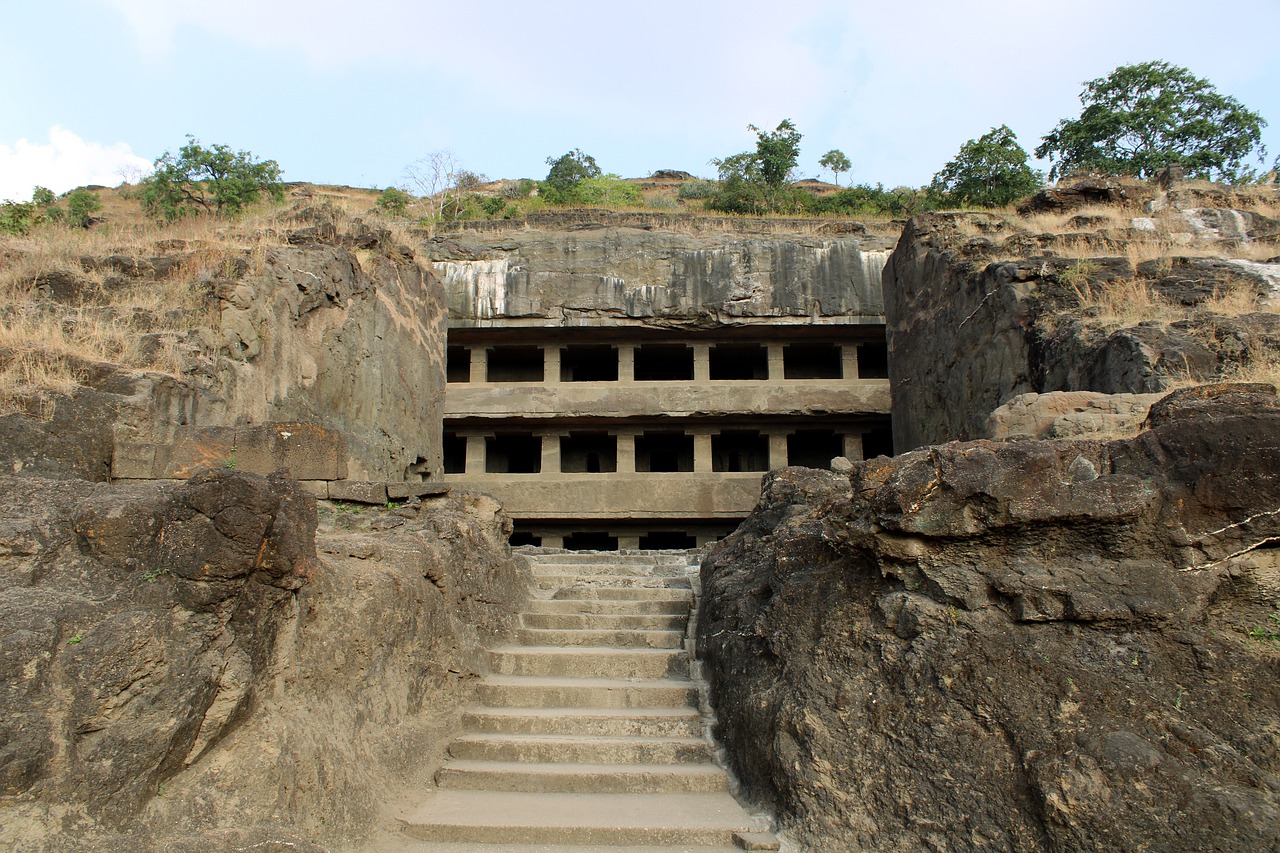 The best time to visit Ellora is at the peak of the monsoons, the streams are filled to the brim and numerous waterfalls including the one that crashes next to cave number 29, add to the charm of the verdant landscape.

Ellora is located on the Sahyadri range, the volcanic flows of the Deccan trap, solidified into basaltic rocks into step like layers, wind and water erosion over millions of years has shaped the layers into terraces, hot gases trapped in the viscous lava escaped as it solidified leaving behind millions of minuscule perforations giving a pitted appearance to the rocks. Layer upon layers of lava flows, created vertical and horizontal joints with fine and coarse grain layers.

The cave excavators utilize the joints for easy cutting of the rocks and chose the fine-grained surfaces for their work because they were better suited for fine carving. 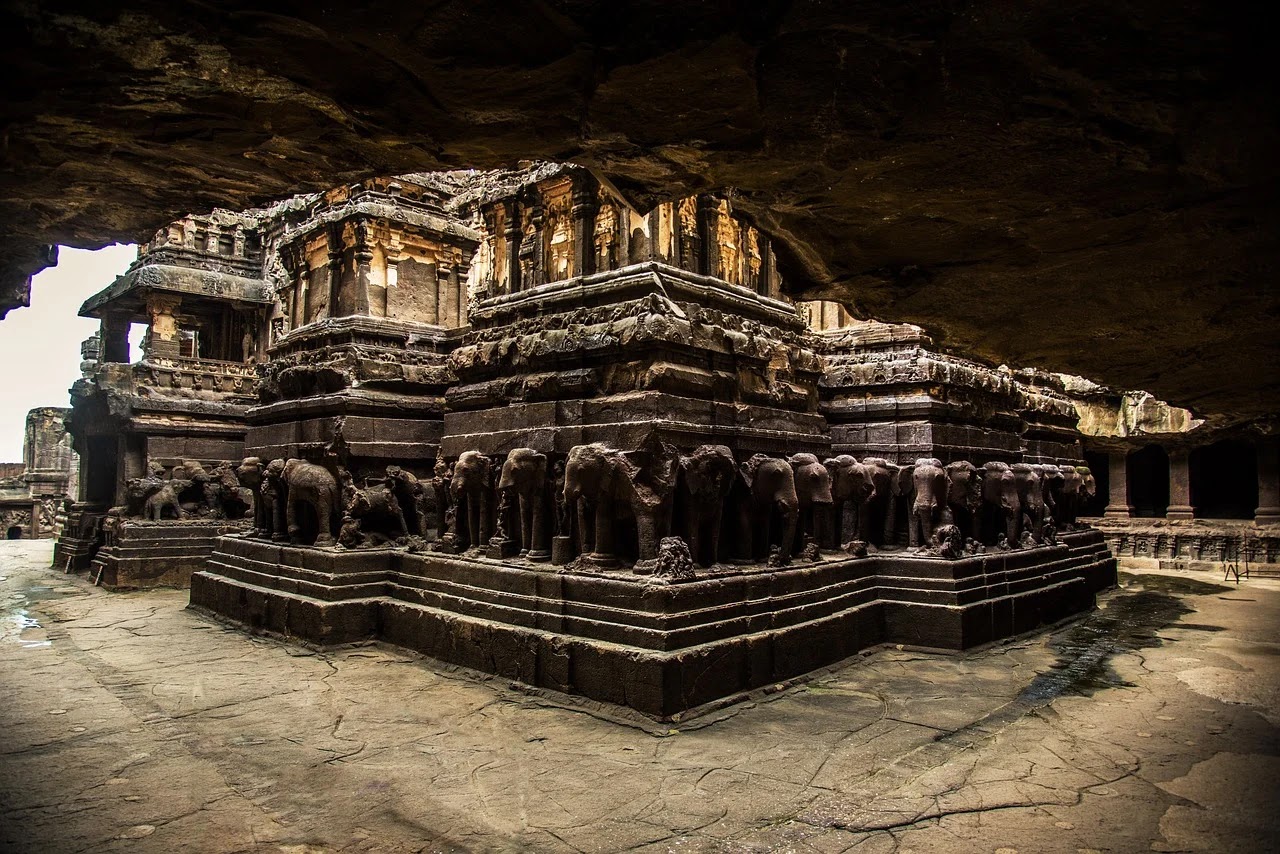 Archaeological evidence from the region suggests continuous human settlement from the early Stone Age to the Bronze Age and later, Major trade routes crisscross the area from before the beginning of the Common Era, creating the ideal condition for locating the caves on this site. Across six hundred years roughly from the 6th and 7th century to the 11th and 12th century of the common era stone excavators, carvers, mural makers and painters of sculptures and engravings labor to create these stunning structures, some commission by royalty and nobility and others by rich merchants and those with means.

Stretched across two kilometers are a large number of caves. Those open for tourists "number 34" and include 12 Buddhist caves in the extreme south of the stretch, followed by 17 Brahmanical caves and five Jain caves to the south. 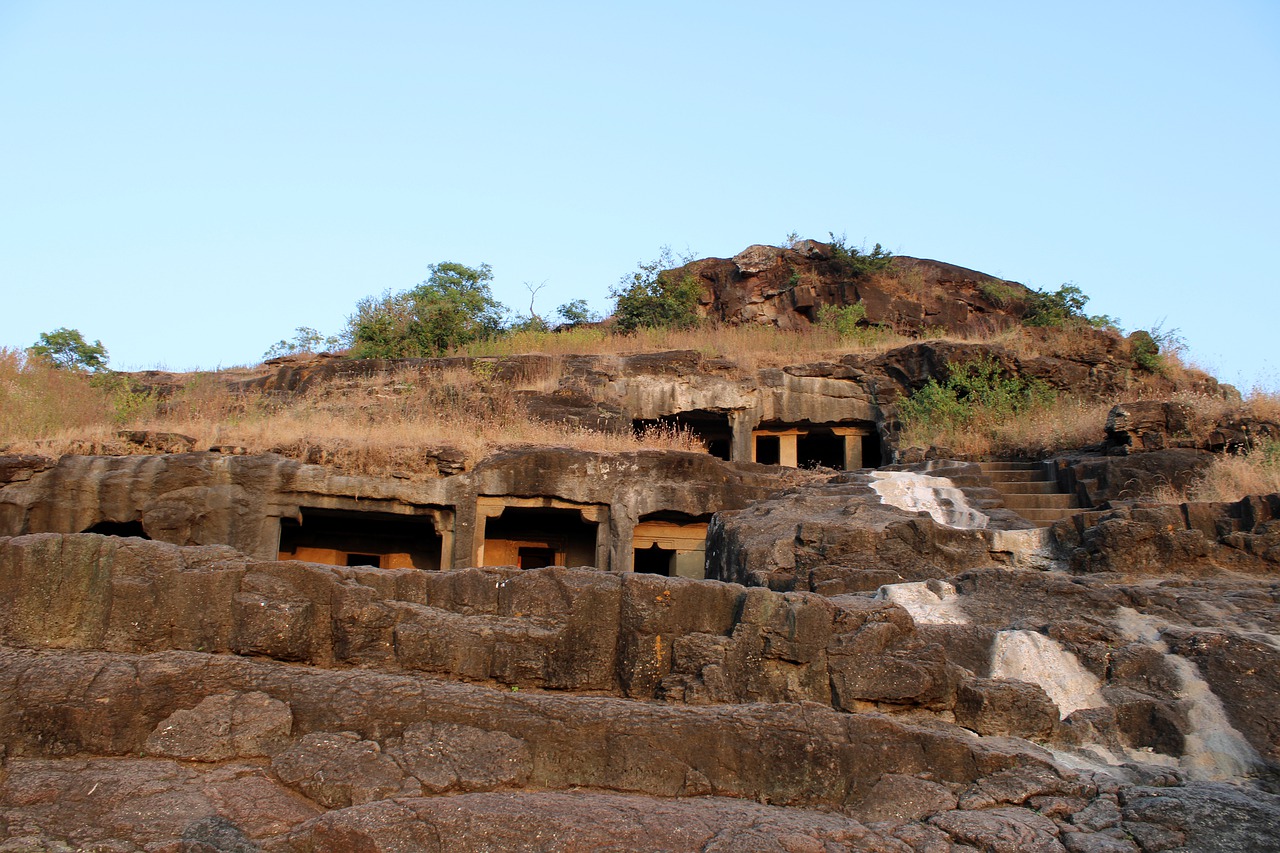 There is no clear demarcation between caves belonging to different faiths, 15 caves are grouped together, out of these the first 12 are Buddhist caves, the next three are Brahmanical, then there is a gap followed by the Kailasa Temple and then cave number 17 both Brahmanical, a little distance ahead to the north are two Brahminical caves numbered 18 and 19 followed after a little distance by caves number from 22 - 28 all Brahminical. Across a stream called Elaganga is cave number 29 another Brahmanical cave, this is followed by a large space without any caves, a little eastward diversion from the main line of the excavated caves brings us to cave 30 the first of the Jain caves known as the chota Kailash, we return to the original line of the rocks carves to a small cluster of four Jain caves 31, 32, 33 and 34.

Ideally you should visit all the caves and spend time looking at the sculptures, carvings and engravings, what might come in handy is the archaeological Survey of India Publication called Ellora one of a series on world heritage sites, the well brought out slim volume costing a mere hundred rupees has all the necessary information, maps, photographs and drawings essential for a first-time visitor, in case you're pressed for time the ASI recommends, 15 out of the 34 caves as a must-visit, caves 6, 10, 11 and 12 from among the Buddhist caves, fourteen, fifteen, sixteen, twenty one, and twenty nine from among the Brahmanical caves and cave number 30 and 38 to cave number 34, all of these are Jain caves. 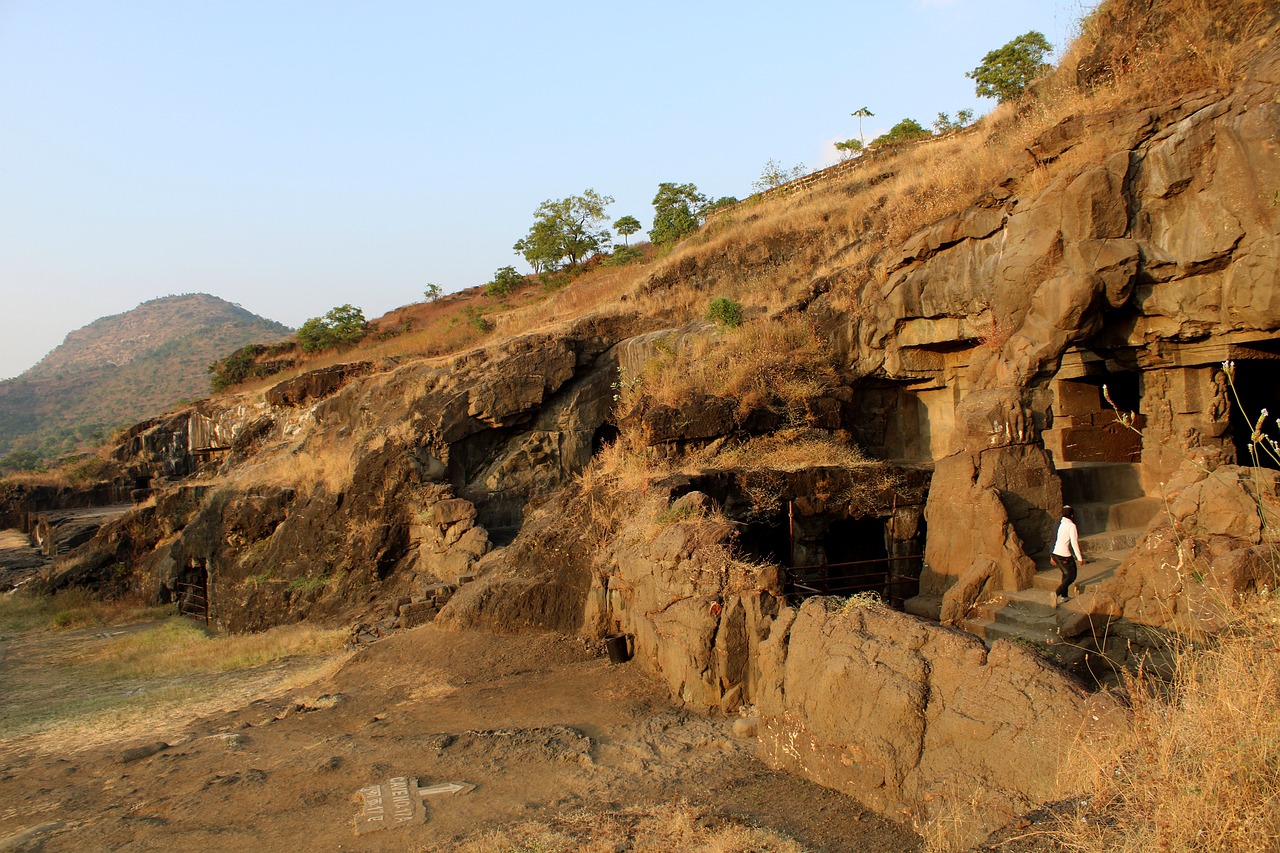 The Buddhist caves are different from the caves at Ajanta in the themes that they depict and also in their arrangement and details, Cave number 10 popularly known as the Vishwakarma Cave is famous for its elaborate facade and is one of the finest examples of a Chaitya temple. One also notices examples of appropriation with a few Buddhist caves later being converted into Brahmanical caves.

The Buddhist Caves at ellora all belong to the period when Mahayana Buddhism has become firmly established and the image of the Buddha is seen everywhere in the Buddhist temples. This isn't clear contrast to the early period of the dominance of Hinayana sect as seen in the caves of ajanta where the Buddha is depicted primarily as the stupa.

Among the Brahminical caves, cave number 16 known as the Kailasa, one of the greatest monolithic carvings in the world overwhelms the viewer with its magnificent proportions workmanship and detailed carvings and battle scenes inspired by the Mahabharata and the Ramayana.

One of the most reproduced carvings from Ellora, Ravan shaking the Kailash mountain "the throne of Shiva" is also to be found as part of this monolithic carving, of the five Jain caves two caves number 32 and 33 popularly known as the Indra Sabha and the Jagannath Sabha stand out as imposing an intricately carved. Number 32 the south-facing cave is the most interesting of the Jain Caves at Ellora, easily identified by the monolithic Mandapa open on all four sides and located at the center of the courtyard. The cave is replete with images of Yakshas, Yakshies, elephants, lions, the Tirthankaras and an imposing image of Mahavira aside from a large number of images connected with Jain mythology and iconography, many of the freezers were originally painted over and traces of the vibrant colors can still be seen that have survived the elements. Unlike modern builders, those involved in the carving of commissioning of these caves did not believe in leaving behind foundation stones with dates and other markers and so archaeologists have had to make educated guesses through associations with scripts in use stylistic details, that have been dated elsewhere and other clues like texts about land grants, Etc. What is broadly agreed however is the fact that the excavations started on this site around the time when excavations at ajanta were in there last phase, that is around the 6th Century of the Common Era, excavations continued here till the 11th and 12th century of the Common Era.

Ellora is on the UNESCO world heritage list and it's a must for those interested in experiencing life and reaching creative expressions, the experience will be more rewarding if you were to arrive at the peak of the monsoons. 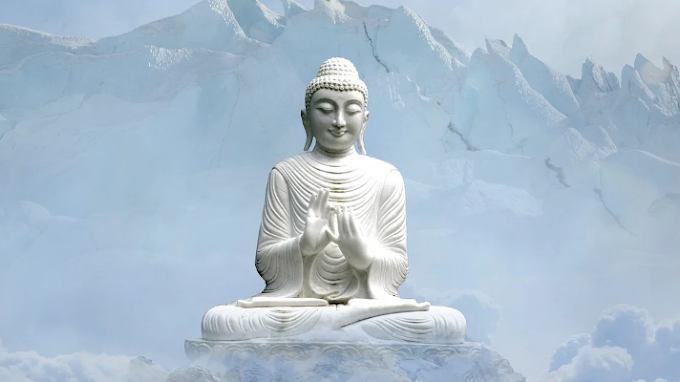