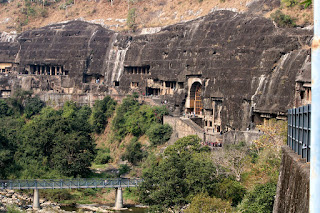 The stunning murals inspired by the life of the Buddha and the Jatakas at the UNESCO world heritage site of 30 man-made Caves at Ajanta, and the stunning rolling hills of the Sahyadri's draped in hundreds of shades of green at the peak of the monsoons. All this just a two and a half hour drive from Aurangabad airport connected by rail road and air to Delhi and Mumbai. Whoever chose the site to create this retreat for Buddhist monks more than 2000 years ago had an eye for beauty and must have known how absolutely charming the place becomes during the monsoons. Dense forests, a narrow 76 meter deep horseshoe-shaped gorge, tucked away behind a curve on the face of a sharpe rocky scarp to ensure peace and privacy for quiet contemplation and meditation. Round the curve of the gorge there are several waterfalls big and small, one can hear them splashing on the hard rock's from outside the caves at the peak of the rainy season.

Buddhist monks stayed here for a couple of months or more during the monsoon, taking a break from their daily routine of traveling, preaching and begging for alms, to study and debate with their peers and learn from their seniors. The caves built at different times and at different levels are spread across half a kilometer overlooking the river Waghora. The caves were excavated as needed sometime during the 3rd Century BCE and others in the 5th Century CE. Each cave was originally connected to the river below through a flight of steps now mostly missing and replaced with a wide promenade connecting all the caves. 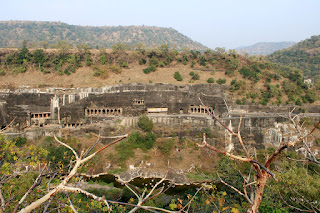 Hyunsang who travel to India in the mid the 7th century and others mentioned the caves but then they dropped off public memory locals knew of the existence of the caves that had been taken over by the forest by the early 19th century. It is thanks to a local Shepherd boy who led John Smith and officer of the British army who happen to be in the area hunting tigers to one of the caves on 28 April 1890. That cave is now known as cave number 10, John Smith went to a nearby village mobilize the villagers to cut the undergrowth to clear a path to the caves and promptly scratched his name and the date on the image of a Bodhisattva.

The rediscovery of the caves and their exquisite craftsmanship took the world of art and archaeology by storm, the delicate lines of the human figures their life like proportions, the ability of these sensuous works to bring to life the attires, the drapes, the jewelry, the rhythm of daily life and the depiction of coats, homes, busy markets, birds and animals, real and mythical, and other aspects of daily life were commented upon and documented extensively, very soon Ajanta became a world famous tourist spot.

The murals and sculptures continue to attract tourists from all corners of the world making Ajanta one of the most visited historical sites in India. Ajanta Caves are described in the UNESCO world heritage citation as the finest surviving examples of ancient Indian art, particularly expressive paintings that present emotion through gesture pose and form. These masterpieces of Buddhist religious art influenced Indian art that followed and modern Indian art beginning with the early 20th century artists of Shantiniketan was deeply influenced by Ajanta murals and continues to resonate in the works of many artists, designers and Architects even today.

All the caves including a few unfinished ones can be divided in two broad categories, the Chaitya-Griha and the Vihara, there are six Chaitya-Griha or prayer halls and they are easy to identify, each Chaitya-Griha has a large arched window above the gate, inside there is a hall and opposite the main gate there is either a stupa representing the Buddha or a sculpted image of the Buddha. There are Verandas on three sides and space for circumambulation behind the stupa or the image of the Buddha, two of the Chaitya-Griha now number 9 and 10 were built in the 2nd Century BCE and belong to the Hinayana tradition, during this period The Buddha was not depicted in human form but as the stupa and you can observe this representation in these two caves, the other four Chaitya-Grihas namely caves number 15A, 19, 26 and 29 were excavated during the 5th and 6th centuries CE. The Mahayana tradition of Buddhism that venerated the Buddha as a homomorphic icon had become dominant by this time, and you would therefore see the image of the Buddha in these caves and the monasteries built in the second phase.

The Vihara or monasteries there are 24 of them were used as living quarters or shelters for the monks. The Viharas are also not difficult to recognize because of the absence of windows above the gate and by the presence of cells used as sleeping quarters for the monks. 8 out of the 30 caves numbered three, five, eight, fourteen, twenty three, twenty four, twenty eight and twenty nine are unfinished or damaged by natural causes. The excavation began from the ceiling and so probably no scaffoldings were needed, in most caves the ceilings look like inverted boats. It was perhaps this shape that inspired the excavators and they even imitated boat ribs and planks in the ceilings. 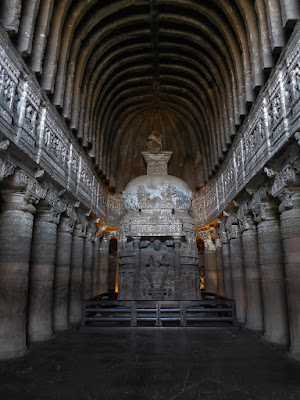 You must not return without visiting caves numbered 1, 2, 9, 10, 16, 17 and 26. Cave number one for its profusion of murals, especially the images of Bodhisattvas including Padmapani and illustrations based on the Jatakas. Cave two its sculptures and murals depicting the Buddha and ceiling decorations. Cave seven despite being a monastery, gives the appearance of a Chaitya-Grihas and has a profusion of carved images of the Buddha and captivating female figures on door frames. 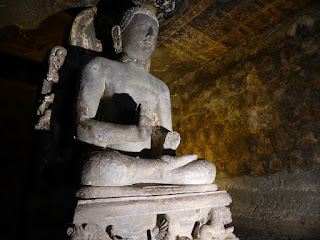 Cave ten is the one that John Smith first saw and if you look carefully you will find his name and date scratched above the image of the Bodhisattva near the right hand rare corner of the the cave.
Ajanta Caves are full of ancient Indian art, paintings and rock-cut  sculptures.