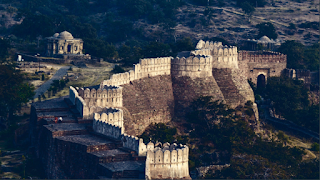 In the state of Rajasthan ambient and palatial hill forts reflect the spacious fortified seats of power of Rajput princely states. Among these fortifications dotting the arid and semi arid landscape are six hill forts that flourished between the 7th and the 18th centuries, and a representative of the relative political independence of those princely states.

The International Council on Monuments and Sites, an advisory body of UNESCO recognised the outstanding universal value of these hill forts in 2013. These six hill forts are Chittorgarh, Kumbhal Garh, Ranthambore, Gagron, Amer and Jaisalmer.

Chittorgarh Fort is the oldest and grandest of the Rajasthan hill forts also known as Chittor.
The fortifications were extended in the mediaeval period, with expansion taking place throughout the 13th and the 14th centuries. The Ford functioned as the capital of Mewar during the rule of the Rajput Sisodia Dynasty from the 7th century until it was finally abandoned after the siege by mogul King Akbar in 1567.
The fort was established in 734 A.D by Bappa Rawal, It is spread over an area of 2.8 square kilometre and has a perimeter wall that extends 13 kilometres long. The fort lies on a hill nearly 180 metres above the valley, drained by the Berach river a tributary of the Banas River.
To enter the Fort, one has to pass through seven gateways. The fort was sacked 3 times between the 14th and 16th centuries in 1303 by Alauddin Khalji, in 1535 by Bahadur Shah the sultan of Gujarat, and in 1567 by Mughal King Akbar.
Following these defeats the ladies of the Royal Court and other women committed Johar or self immolation the Rajput tradition of death before dishonour in the face of surrender to an invading army.
The fort once had more than 84 water bodies of which only 22 exist today.

Around 150 kilometres northwest of Chittorgarh is the fourth of Kumbhal Garh, built in the 15th century by Rana Kumbha. Maharani Pratap was born in Kumbhal Garh.

Situated in the middle of a forest, the fort is built on a ridge 1180 metres above sea level. The fort has a perimeter wall that extends 36 kilometres, the front walls are between 15 to 25 feet thick and the fort has 745 gateways. The Palace area consists of the Kumbha Mahal, constructed between 1443 and 1468 and Badal Mahal Constructed between 1884 and 1930. The Badal Mahal was built by Rana Fateh Singh and it occupies the highest point of Kumbhal Garh Fort. There are over 360 temples within the Ford, both Jain and Hindu.

In the eastern part of Rajasthan state is Ranthambore fort, situated near Sawai Madhopur town. It is an example of a forest hill Fort. It lies today within the Ranthambore National Park. Built 700 ft above the surrounding plains, the fort was founded in the year 944 for by the Nagil Jayant. The fortress and passed into the hands of the Chauhan Kings, was captured by the Delhi Sultanate in 1226 and was recaptured by the Chauhans in 1236. The Mughal Emperor Akbar captured the fortress in 1559 and eventually the fortress was overrun by the Kachhwaha Maharajas of Jaipur within the 17th century and remained a part of the Jaipur state until India's independence.
The dense jungle are on the fort. Add a layer of defence, a key feature characteristic of the Rajput forest forts. It covers an area of 233 acres, and the walls of the fort have a circumference of 5.4 kilometres. Four gates guard the access to the palace area.

A fine example of a river protected fourth is Gagron fort, which is surrounded by the waters of the Ahu and Kali Sindh Rivers on three sides. The fort is 10 kilometres north east of Jhalawar City, found it in the seventh century and greatly expanded during the 11th century. The fort, surrounded on three sides by water and the fourth side of the fort is protected by a mode. The main access to the fort is from the northern side, via a steep passage.  The fortifications consists of an auto wall and an inner fortification wall towards the riverside. The hilltop is defended by the vertical Gidh-karai or vulture's cliff, nearly 100 metres high.
The palace area lies in the inner enclosure, while in the outer enclosure are many courts and temples.

11 kilometres from Jaipur is the famous Amer fort built by Raja Man Singh I.
Amer fort with its large ramparts, series of gates and cobbled parts overlooks the Maota Lake. Amer was ruled by the Kachhwahas from the 11th century onwards till 1727.
When the capital was shifted to Jaipur during the time of Sawai Jai Singh II, The fort has been constructed on a four level layout plan, each with a courtyard.
Amir Palace represents a key phase in the development of a common Rajput Mughal court style , The first main courtyard is Jaleb Chowk, a place for soldiers to assemble.
The second courtyard houses the Diwan-i-Am where petitions from the public were heard, the third courtyard is where the private quarters of the maharajah, his family and attendants were built. The courtyard has two buildings facing each other, separated by a garden laid in the fashion of the Mughal Gardens. The fourth courtyard is where the women of the royal family lived.

In the western desert of Rajasthan is the Jaisalmer fort one of the world's largest forts dating back to the 12th century.
The fort built in 1156 A.D by the Bhati Rajput ruler Rawal Jaisal, sits on Trikuta Hill surrounded by The Thar Desert, It is also known as the Sonar Kella of the golden fort named after its massive yellow sandstone walls.
During mediaeval times, the city played a major role in trade with Persia, Arabia, Egypt and Africa. The fort is protected by three layers of walls.
The defences of the fort include 99 bastions of which 92 a built between 1633 and 1647. The emergence of maritime trade, let the gradual economic decline of Jaisalmer. The major attractions of the fourth include the Royal Palace, Jain temples, The Laxminath Temple and the four massive gateways.The fort has an engineer's grenade system called the ghut nali, which allows for the straightforward drainage of rainwater faraway from the fort altogether four directions.
Over the years, uncontrolled construction has greatly reduced its effectiveness. Even today, people were inside the fort, making it a unique living fort in the country.