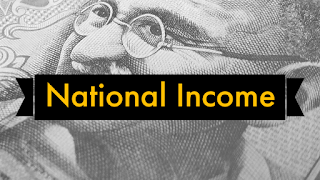 When we subtract the depreciation from GDP then we get NDP.

NDP = GDP - Depreciation
A reduction in the value of an asset with the passage of time, due in particular to wear
and tear.

Total monetary value of goods and services by Indian nationals, whether they are in India or outside India is called GNP.

When we produce a product including land, labour, capital, organiser, how much it costs us is called factor cost.

when a buyer buy something in market, that price is called market price. Market price is a inclusion of indirect taxes in Factor Cost.

When indirect taxes are deducted from the net national product received at market price and subsidy is added, then it gives us the national income.