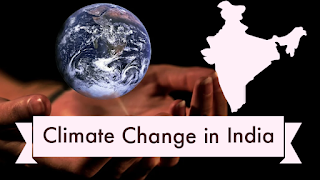 India has a long history it's way more longer than any other civilizations, Back in time we were more blessed with natural resources, never mentioned any water or food crisis, but now the time has changed.

Climate change is a global issue which is not only alarming for India but for the entire world. But we are having the most air polluted cities and most populated country. This should not be ignored. Otherwise consequences will be terrifying.

After independence India has stepped on the accelerator for growth, Like all other developing economies we have build dams ,heavy industries and factories for consumer goods, we are burning fossil fuels to keep running our vehicles and industries all the factors are pushing up the average Global temperature.
All these things are necessary to sustain our development but there are many other reasons that should be stopped immediately.

Indian Government is implementing new forest policies that are focused and more tilted towards privatization and industrialization, it's true that we need growth, but it doesn't mean we want the growth at the cost of our health.

Cutting down of forests in India is happening in a huge scale and deforestation has become a part of our development.
We are trying to achieve our goals of 33% forest covered area but struggling at around 21.

India has no more breathing air

India is one of those countries who have worst air quality, coronavirus has given some relief to the environment, but this is temporary and after some time we will be back on the same track.

India has the top most polluted cities in the world

● Kanpur
● Faridabad
● Varanasi
● Gaya
● Patna
● Delhi
● Lucknow
● Agra
● Muzzafarpur
● Srinagar
● Gurgaon
22 out of 30 most polluted cities are in India.
In the year 2017 air pollution caused 1.2 million deaths in India.Globally every year 900,000 children are dying due to air pollution.
Don't think that people those who can afford air purifiers and expensive stuff are safe, they are also on the same edge, everybody will have to face it.

There are many diseases caused by air pollution like lung cancer, cardiovascular problems and it affects pregnant women and newborns,shortened life span and  many other diseases.We have to stop it otherwise our future will be bleak. 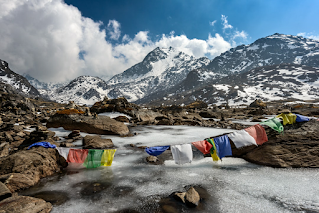 The great Himalayas always been a protector for India, not just being a protector from our Enemies but India is very much dependent on the Himalayas. Maybe you would think that it's too far from us, but you must think of it, the food comes to our table is also dependent on Himalayas in a direct or indirect way.

Why should we bother about climate change in Himalayas

We should bother about it because more than 3 billion people mostly from HKH countries like India, China, Pakistan, Nepal, Bhutan, Myanmar and Afghanistan these Hindu Kush Himalaya countries are dependent on Himalayas for their food and water.

Himalayas are also called third pole on the earth because after North and South Pole the amount of ice in Himalayas is so vast and its melting and it's clearly visible, nowadays flooding is so much increasing in India so we have to do Something.

IPCC stands for intergovernmental panel on Climate Change, it's a body under the auspices of United Nations.In 2018 they had published a report on on limiting Global temperature.

So much area of the Sundarbans Delta has been submerged under water. This is not an event that we are not able to see this is happening in front of our Eyes

How far can we go taking our selfishness, It's time to fulfill our responsibilities at our personal and social level